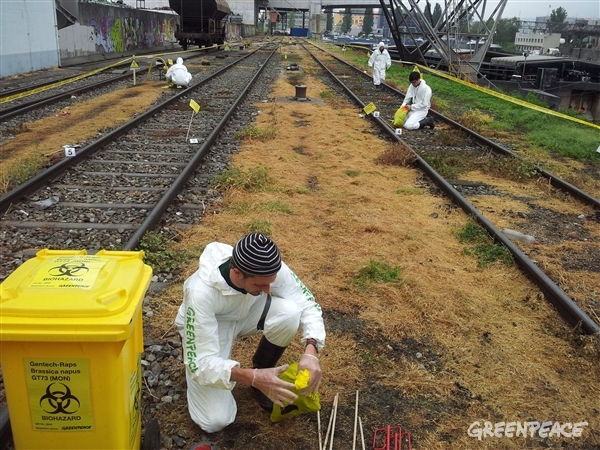 Switzerland has in fact had a GE moratoriumin place since 2005 and the import of GE crops in foodstuffs and animal feed is prohibited. So where did the GE canola come from?

The GE canola was found growing wild in Basel’s port area. It is suspected that the canola seeds fell to the ground during the transit of barges or freight trains. Greenpeace Switzerland tested 136 canola plants and found 29 that tested positive for GE, all of which were Monsanto´s herbicide-tolerant canola, GT73 (also called RT73). This was not the first time GE contamination has happened through a port area.

In 2005 Japanese researchers found that GE canola had escaped into the wild from major shipping ports along the Japanese coast. There is no canola cultivated in Japan, but feral (plants that grow in the wild without cultivation) GE canola is growing in many locations around the ports and roadsides from spillages of imported GE canola from Canada.

Japanese farmers and consumers have been testing and removing feral GE canola ever since. In Japan, farmers are concerned that radish, broccoli, mustard and non-GE canola may have been cross-pollinated with GE canola.

GE canola is mainly cultivated commercially in Canada and in the US, where it has contaminated non-GE canola. In fact, herbicide tolerant GE crops are generally causing havoc for farmers that face new problems with superweeds.

Some of these superweeds have become tolerant to Monsanto’s own Roundup herbicide. Therefore even more chemicals are required to combat the superweeds. Cultivation of herbicide tolerant GE crops supports intensive chemical agriculture, which damages soils, groundwater and biodiversity. This ia a problem that is now occurring in Australia.

GE canola contamination is already spreading in the European Union, even though it has not been approved for commercial cultivation in the EU. If released into the environment, the germination of canola seeds cannot be contained. A Swedish study has also shown that GE canola seeds could survive and be viable for germination even 10 years after their release into the wild. There are many studies from North America confirming that GE canola can escape and form feral populations along roadside verges. These feral populations can act as a reservoir of GE genes that can also contaminate non-GE canola seeds and fields.

The only way we can prevent any further contamination is to stop releasing GE plants into the environment. Furthermore, GE crops are not needed, nor wanted. We can breed crops with traits such as drought tolerance, and even vitamin-enhanced crops, without resorting to GE crops.

Breeding new crops is only one part of agriculture, other parts include making agriculture resistant to threats such as climate change by increasing its resilience, and this means working with nature, for example by maintaining healthy, fertile soils by employing ecological agricultural techniques.

Ecological Farming ensures healthy farming and healthy food for today and tomorrow, by protecting soil, water and climate. It also promotes biodiversity and does not contaminate the environment with chemical inputs or GE seeds.

In fact, farmers and regions that chose GE-free canola make more money. For example, the farmers in the state of Tasmania in Australia are receiving a higher price for non-GE canola from Japanese consumers.

So who needs GE canola really?